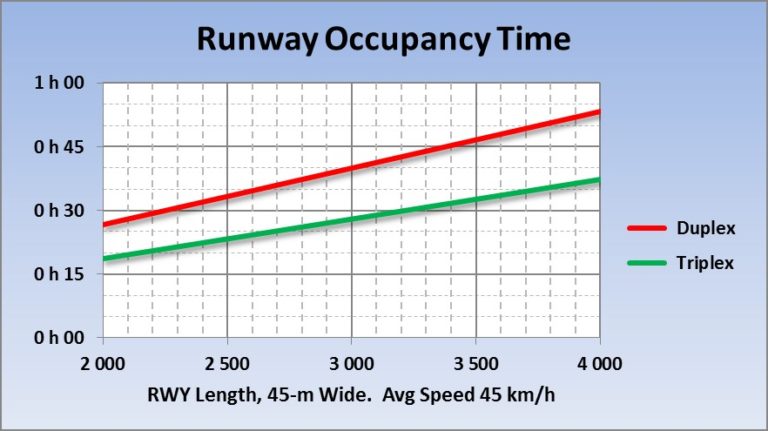 It is often considered unnecessary to sweep runways, based on the erroneous impression that the jet blast of the preceding aircraft has removed all FOD by blowing it away.

This is not the case; jet blast may project the FOD for example towards other aircraft lining up or simply an aircraft vacating the runway may propel FOD from the taxiway surrounding area back onto the runway. Wind is also in important factor in FOD “migration” from one place to another.

Running only once the FOD*BOSS® on the runway is sufficient to prove that is was a necessity as evidenced by an amazing amount of FOD picked up. A growing number of airports are using the FOD*BOSS® at least on a weekly basis.

Thanks to the high speed at which the FOD*BOSS® may be towed, combined with the impressive sweep width offered by the Duplex or Triplex version, the time necessary for sweeping the runway is sufficiently short to facilitate its use with little if any impact on operations.

The graph shows the time required to sweep a 45-m wide runway, using either a Duplex or a Triplex FOD*BOSS®.